The first two days of EuroShop—the place to discover the hottest trends in event and tradeshow design—are typically the busiest, and this year they seemed even busier than usual. As I and Mark Johnson, Star’s CEO, wrap up our first hours at the show, here are some of the trends we’re seeing. 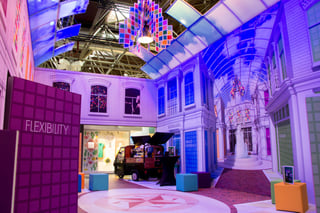 One obvious trend in exhibit design is floor-to-ceiling booths. “Everything is so tall and so oversized,” says Justin. “It’s like walking through downtown city blocks…with narrow streets. Everything is on top of you.” While the visual impact of this is huge, we wonder how guests can tell which exhibits they’re visiting when most signage is 20 to 25 feet off the ground. One exhibit we were fascinated by featured enormous 30-foot castle doors—a bit overwhelming, we thought, especially when you consider we were standing just five feet in front of them. Displays and props within booths also were oversized; many spaces featured enormous central work tables where people could gather to view demos, compare products, look at samples and engage in conversation.

Trend #2: Motion grabs attention. To match the giant scale of EuroShop exhibits, many feature huge images. But aside from these large images, we saw very few smaller static images. Instead, exhibits clamored for attention with eye-catching LED displays and lightboxes, and motion, motion, motion.

Trend #3: Robots relate. Some of the most interesting exhibits we visited used robots to engage and interact with people—even to gather leads. Justin chatted with a robot who took his picture and then immediately emailed it to him. 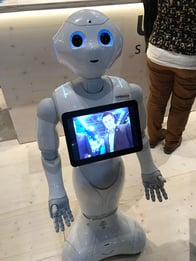 Trend #5: Extreme hospitality. Much more so than in the U.S., exhibitors in Europe invest in long-term relationships and design spaces to facilitate trust-building conversations and interactions. That’s one reason why so many EuroShop exhibits feature hospitality bars, comfortable seating and even full-service restaurants. Compare this to U.S. trade shows where the focus is more transactional (e.g., how many leads? how many bodies?).