More and more industrial firms in the Twin Cities are providing the new perks as they build or remodel production facilities and warehouses.

Ethan Schwanke considers himself a coffee connoisseur, and he was impressed when his employer started to provide Kona coffee shipped straight from Hawaii. He enjoys it on breaks off the workshop floor.

“It just helps spice up the day a little bit,” says Schwanke, a production engineer at Star Exhibits in Brooklyn Park.

Premium coffee, craft beer, tricked-out kitchens, sun-filled workspaces and decked-out patios are no longer perks just for people working in hip and wannabe-hip offices. More and more industrial firms in the Twin Cities are providing them as they build or remodel production facilities and warehouses.

Factories have always provided break areas and sometimes outdoor recreation spaces for workers. But now, industrial firms are pressing real estate developers to do even more.

One local developer is looking to attract a brewery into a redeveloped industrial site, in part to give workers at other firms on the site a place to hang out. “It’s not just your office workers who enjoy natural light and open space,” said Dan Larew, an industrial broker for the Minneapolis office of commercial real estate services company JLL. As with office-oriented employers, much of the push for amenities at more industrial sites can be tied to the tightening labor market. Companies have to aggressively compete for talent, and the modern features of their facilities are being used as recruiting tools. 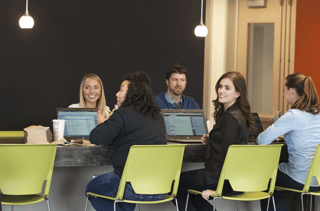 The more than 200,000 square-foot building is similar in size to the company’s old location nearby, but it is more efficiently organized, open and modern, said Justin Dworak, Star creative director.

The building has a cluster of huddle rooms, white-noise speakers and an updated lunchroom with a patio and outdoor fireplace. Dogs are welcome.

Star, which provides marketing consulting, wanted to replicate what workers would find in the trendy offices of the North Loop of Minneapolis and bring employees together in the new common areas, said Andrew Brown, Star’s director of sales and marketing.

“What we do here, everything is really project-driven, so having these groups together is really critical,” he said.

In the assembly shop where woodworkers build displays by hand, vents in the ceiling allow fresh air and windows provide more sunlight. Even the warehouse has numerous windows.

“Our new shop compared to our old shop is night and day, almost literally,” Schwanke said.

Besides the improvement in worker morale, company executives are also hoping the new space could lead to greater work efficiencies in general. Plus, it is more inviting to clients.

The 610 Zane Business Park was developed by Ryan Cos., which has completed a number of modern industrial buildings over the past few years including spaces for personal-photo bookmaker Shutterfly Inc. and Bayer pharmaceutical company’s Crop Science division, both in Shakopee.

The first stage of the 610 Zane complex was a Hy-Vee grocery that opened last summer. The park is also close to Hwy. 610 and near where many Star employees live.

“A lot of why [Star] is there is to give their employees more amenities like Hy-Vee or the retail we will build in the future,” said Casey Hankinson, vice president of real estate development for Ryan Cos.

Northern Stacks in Fridley is another commercial development that is pushing the bar in how industrial is done. Paul Hyde of Hyde Development bought the site in 2013 and began the task of transforming it with Mortenson Co. The Superfund site has undergone a massive multiphase redevelopment and is the home of several companies, including defense and aerospace firm BAE Systems and Trio Supply Co., a distributor of food services, janitorial and sanitary products.

Workers are putting the finishing touches on the third building on the campus that will be leased by PlayCore Inc. for use by two of its subsidiaries, Dero Bike Racks and Everlast Climbing Industries. There will be a rock-climbing wall in the lobby, an exercise room with spin bikes, showers and bike wash and repair stations. Some of the loading-dock doors are glass garage doors to bring in more light.

“Providing these amenities helps our staff to be active, and an active staff is a healthier, happier and more productive staff, so it’s a win-win for employees and the company,” Tim Sudeith, a PlayCore senior vice president, said via e-mail.

Hyde and Mortenson plan to convert a former boiler room at Northern Stacks into a brewery and taproom, incorporating the smokestacks that rise up out of the space.

“We are looking at everything from the brewery to walking trails throughout the park to break room patios with lots of glass,” Hyde said. He added, “This is exactly what we are trying to do, provide the same amenities that office users want in an industrial park.”