When an amazing networking opportunity presented itself how could I resist! In early October I was able to attend an event with a few other Star employees called the Business of Beer Panel. The Minneapolis St.Paul Business Journal's second annual Business of Beer panel was held at the Minneapolis Club featuring four experts from the local craft beer industry: Jim Watkins, co-founder of Sociable Cider Werks, Damian McConn, head brewer at Summit Brewing Co., Deb Loch, co-founder and head brewer of Urban Growler Brewing Co., and Dan Schwarz, co-founder and CEO of Lift Bridge Brewing Co..

Here we were able to network and meet with others of similar interest while also getting the chance to learn more about developing brewing industries in the local area. Star is hoping to partner with some breweries to help them stretch their limited marketing budget by creating taprooms that allow the breweries to stand out, share their brand story and provide visitors with an unforgettable experience that will not only gain customers but bring visitors back to the taproom.

Watkins from Social Cider Werks states the importance of a breweries site: “We don’t have a marketing budget, so for us, our marketing arm is that taproom. We want [customers] to experience our brand in a tangible way, so the space was really, really important. Seven years ago, 10 years ago or 30 years ago that was a lot less important because it wasn’t quite so difficult to stand out.”

In addition, we learned that the MN craft beer industry is still growing. Dan Schwarz from Lift Bridge Brewing Co shared the following to support the growing industry: “I checked the 2014 sales numbers in the state, and Minnesota-made beer was just under 10 percent [of market share]. In cities like Portland,Ore., consumption of craft is 50 percent, so I think that’s an indicator that there’s a lot of room left. I don’t know when we’ll get to 50 percent, but I think we’ll definitely see 20 percent [market share] in the not-too-distant future.”

Overall, it was a wonderful event and learned a lot about familiar hoppy hour beverages and the growing industry. We'll post a link to an audio replay from Minnesota Public Radio when it's available.

To read more about the event, check out the MSP Business Journal recap here. 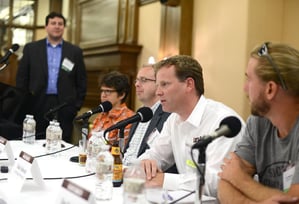