A Partnership Worth Smiling About

Have you ever had to have a tooth removed? If so, you likely had three choices: do nothing and leave a gap in your smile, replace the tooth with an implant or opt for a removable partial denture, or RPD. Because an RPD creates a more attractive smile than doing nothing and is less expensive than an implant, it’s often been 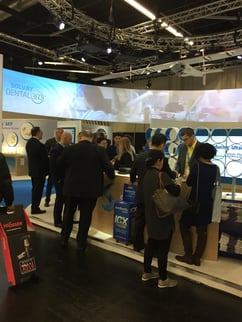 the preferred choice . . . and is becoming even more so thanks to Solvay Dental 360TM, a division of Solvay, the multi-billion dollar chemistry company based in Brussels.

Traditionally, RPDs were made with metal and held in place with wires. While incredibly durable, metal is heavy and often uncomfortable. Plus many people have allergies to metal or find it causes an annoying taste. What’s worse, it looks like metal.

So Solvay’s chemists developed a polymer to replace the metal, and Star, partnering with Pointward, a Minneapolis-based marketing agency, created an exhibit to showcase the innovation at the International Dental Show (IDS).

Held March 21-25 in Cologne, Germany, the show features dental industry products, developments and trends and is considered “a must” for the dental industry. I was lucky enough to attend to show; even luckier to work in Solvay’s booth, where I got a chance to see firsthand how a revolutionary new product and a truly effective exhibit can attract visitors, generate leads and close sales.

Taking a Bite Out of the Competition

Solvay Dental 360 had spent several years developing Ultaire AKP, a high-performance polymer engineered to replace metal as the material of choice for RPDs.

To launch the innovative and game-changing product, Solvay’s first for the dental market,

we designed a large 22.5 m x 9 m exhibit that highlights Ultaire AKP’s strength as well as its lightness. In designing the exhibit, Marsha Lynn Star’s creative director, played off the puck-like design of the pre-modeled product by featuring concentric circles.

Her design also featured Solvay’s must-haves, as well as a few perks designed to attract and engage show visitors. Specifically, there were:

I rarely see people taking selfies of themselves at an exhibit booth. But that’s exactly what happeed at the Solvay exhibit; it was that memorable. Solvay dominated its hall at IDS, generating a lot of positive press and visitor interest. People kept stopping by to say they’d heard about the product and needed to see it for themselves. What more could we—and the client—want?