Homebrew Con is the national conference of the American Homebrewer’s Association.

This year’s conference—hosted in our hometown of Minneapolis—attracted more than 3,000 people from around the world, all of whom shared a common goal: to celebrate home brewing.

As you would expect, the conference featured beer. LOTS AND LOTS OF BEER, most of which was made with products on display.

The three-day conference also offered attendees a chance to network, share knowledge and learn about products and practices to improve their own brewing. It included keynote speakers, break-out sessions, an expo hall with exhibitors, nightly parties and a final celebratory “club night” where national brewing clubs showed off their beers in a fun and raucous atmosphere.

We loved it. The two of us have been brewing (sometimes together) for about four years and were really looking forward to Homebrew Con. Though we mostly wear our marketing hats when attending events such as these (creating events for Star’s clients is our job, after all), we were eager to attend as consumers, an experience we found both refreshing and reinvigorating. (By the way, if you haven’t attended a conference or trade show that’s focused on a hobby you enjoy, we highly recommend doing so.)

Here are three lessons—about events, not brewing, though we got plenty of those, too—that we took away from Homebrew Con:

Lesson No. 1: Passion matters. Yes, homebrewers—like other niche enthusiasts—are a special bunch; we didn’t meet a single one who wasn’t willing to engage in an hours-long conversation about brewing processes. The comradery and collective enthusiasm was visible everywhere, especially in the show’s largest dedicated space—the “Social Area”—where local homebrew clubs did “tap takeovers,” offering up as many as 12 of their own beers to anyone who wanted a sample.

This highlighted something we at Star know well: that an event’s success depends on tapping into a shared passion. Without it—and attendees’ desire to seek out and engage with their peers—exhibits fall flat, no matter how much they cost.

Lesson No. 2: Swag satisfies. People love getting things for free. Take Joe, for instance. He obsesses over free sunglasses; for proof, check out this photo. But free gifts are even better when they’re applicable to the show’s theme, and Homebrew Con featured many great examples of funny, useful and, most importantly, memorable giveaways that helped brands extend their reach beyond the show floor.

Lesson No. 3: Creativity rules. We were struck by the amount of creativity and the variety of exhibits at the conference. A very DIY show, the lion’s share of exhibits—including many that were well-themed and well-executed—were built for very little. That meant that other exhibits, including some obviously designed and built by professionals, looked a little out of place. But regardless, what really mattered was the ability of the brewers to creatively engage show attendees in conversation. Free beer helped, of course. So did having a strong brand and a good story. After all, people don’t go to shows to get their badges scanned; they go to talk about what interests them. In this case, beer. 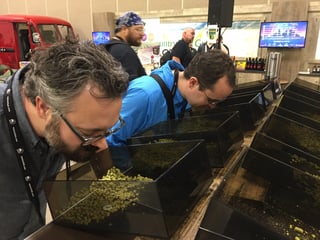